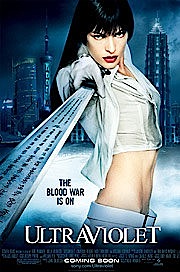 In short, this film is a mess. It has the potential to be something interesting with the biotechnological spin on lycanthropy or vampirism, but the way the film has been plotted and cut together doesn’t work at all. Apparently, there’s a longer cut out there that has about 30 mins more than the theatrical/DVD version (and a slightly extended Blu-ray version in Japan), which has more background narrative that gives context to the wider story but that isn’t here. It feels like an endless series of Gun Fu (or Gun Kata).

So, transhumanist elements around biological ‘enhancement’ of the human species, but not really a thought-provoking example of it. The kind of film that makes sense at 30,000ft on a long-haul flight in the middle of the night.